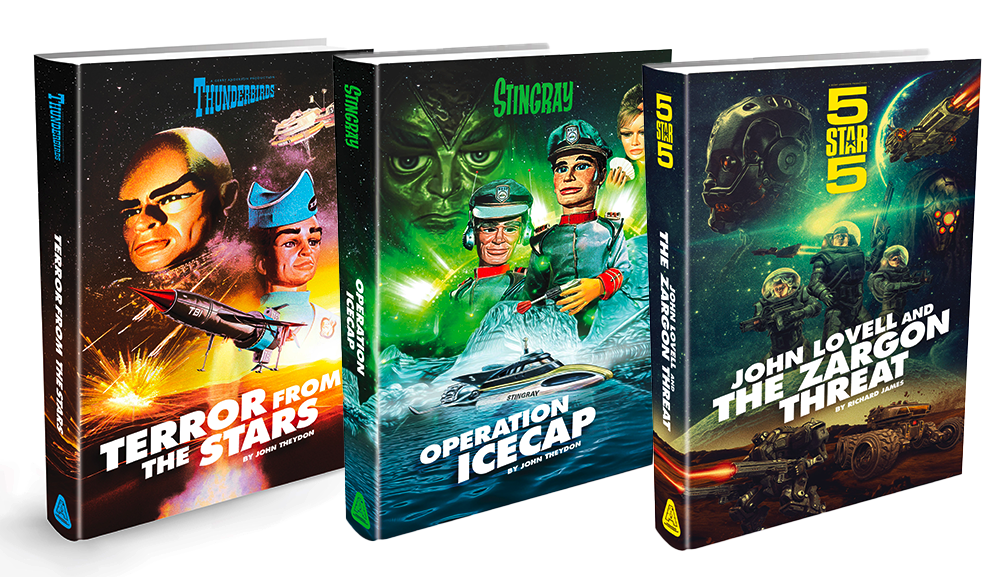 Anderson Entertainment, the company founded by Gerry Anderson – the man behind such iconic shows as Thunderbirds and Space:1999 as well as modern hits like Space Precinct and the 2005 reimagining of Captain Scarlet – has announced its entry into the direct-to-consumer publishing business.

Books in a wide selection of formats – including hardbacks, coffee table books, comic anthologies, series guides, audiobooks and more – will soon be launched. They will be based on classic Anderson properties, as well as many new Anderson projects, available, in production or planned.

The new books will be aimed at a vast, and still growing, audience. The direct-to-consumer approach builds on the strength of the online Gerry Anderson shop and Anderson Entertainment social and owned channels – with access to over 150,000 fans. This approach will allow Anderson Entertainment to market effectively by initially targeting its strong customer community.

However, this is only the first phase of the publishing strategy. After the direct-to-consumer publishing business is established, these books will also be made available through the mainstream book trade.

The publishing project begins with novels – a series of stories originally published in the 1960s and 1970s. These books are now being reprinted and repackaged for a modern audience. In particular the books will target a growing fanbase of all ages now able to access Anderson classics on both linear and streaming services.

The books will be available in four formats: as physical print books in hardback (with slight adjustments to the content for a 2021 audience), as Kindle e-books, as digital audio downloads and as packaged audiobooks, including extras.

Thunderbirds: Terror from the Stars, an adaptation of John Theydon’s 1965 book Thunderbirds, is the first of the new books. The audiobook version features both narration and a full cast, with characters voiced by such major names as Dead Ringers favourite Jon Culshaw and Harry Potter star Genevieve Gaunt. The packaged audiobook comes in a four-CD set that includes a behind-the-scenes documentary.

All physical formats are being made available at the Gerry Anderson online store from July. The digital download audiobook version is now available and is also being sold on the website of Anderson Entertainment production partner Big Finish, while e-book releases will be available globally via Amazon. More titles will appear on a monthly basis from this summer.

And that’s not all. Late 2021 will see more – very different – new titles. One will be a two-volume anthology of comic strips based on the enormously popular live action Anderson show UFO. It’s the first time all the UFO comic strips have been collected in book form.

The second book will be a Moonbase Alpha technical manual, a guide to the scientific research centre that is home to the cast of Space: 1999. It’s a coffee table book in the style of a 1970s technical manual but updated with new written material and hundreds of newly commissioned images. It will also be the first truly authoritative guide to the iconic Moonbase – a must for fans of the hit 1970s live action show.

Much more is planned. Thunderbirds, Captain Scarlet, Joe 90, UFO and other shows inspired not just novels but comic books, annuals and much more. Enhancing and repackaging the best of such content will be a strong part of the Anderson Entertainment publishing strategy. And of course the ongoing audiobook launches will have the added attraction of highlighting established and emerging acting talent.

These plans for growth come hard on the heels of a new agreement with rightsholder ITV Studios, which allows Anderson Entertainment to expand its ranges of product derived from its classic brands. This agreement will enable not only published output but also a wide range of new and innovative products inspired by the best-loved Gerry Anderson creations.

Writer, producer, director, and Gerry Anderson’s son, Jamie Anderson is MD of Anderson Entertainment. He will also be directing some of the cast-led audiobook productions. He says: “Beginning a new era as a publisher with direct-to-consumer product will build on the close relationship we have with many tens of thousands of Gerry Anderson fans around the world. At the same time we firmly believe that the growing popularity of both classic and new Anderson output will help us to target a wider audience that can also be reached by traditional online and physical booksellers This is an exciting venture for Anderson Entertainment and one that underlines the continuing strength of the Anderson name and brands and is the perfect addition to our existing threads of direct-to-consumer activity.”