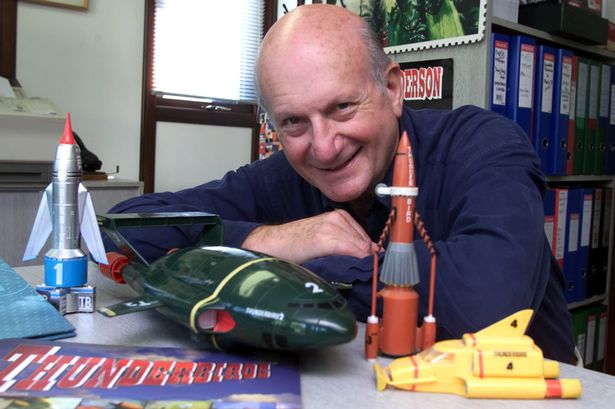 The event promises to deliver an “Exclusively Anderson” experience, celebrating the life and legacy of British television’s most celebrated Science Fiction producer, and creator of telefantasy classics including Thunderbirds, Space 1999, Joe 90, Captain Scarlet, UFO and Stingray.

AnderCon 2014 will be taking place on the weekend of Saturday 19th and Sunday 20th April, 2014, at the Park Inn Hotel, Heathrow Airport, London.

There will be guest appearances from many of the stars of some of his most celebrated shows across the weekend, including from Space 1999 Zienia Merton, Prentis Hancock & Pam Rose, Space Precinct’s David Quilter & Richard James and Thunderbirds David Graham, Matt Zimmerman & Shane Rimmer, Liz Morgan from the original Captain Scarlet and the wonderful Denise Bryer, who played the evil Zelda in Terrahawks.

The event also aims to bring to life the creativity and ingenuity of those early studio days through displays of production drawings together with recreations of actual sets used in the filming of classic shows such as Thunderbirds and Stingray, including; Brains Laboratory, an explosive Refinery, the Rolling Road beloved of many an action sequence, and Stingray’s “underwater” tank, complete with fish alongside some of the surviving full sized vehicles that appeared in Anderson’s productions. Production personnel attending currently includes Mike Trim, Steve Begg, Kevin Davies, Crispin Merrell, Terry Adlam, Des Saunders, Phil Ford, and from the very beginning, Gerry’s original business partner at AP Films, Arthur Provis.

In addition to props and models used in the actual filming of Anderson’s shows, there will be an impressive display of reproduction props and models courtesy of fan collectors and prop builders. The restored Strakers Car from UFO will also be unveiled at the event.

More information on the event can be found on the events website – www.andercon.co.uk with additional guests and event attractions to be announced in the coming months.