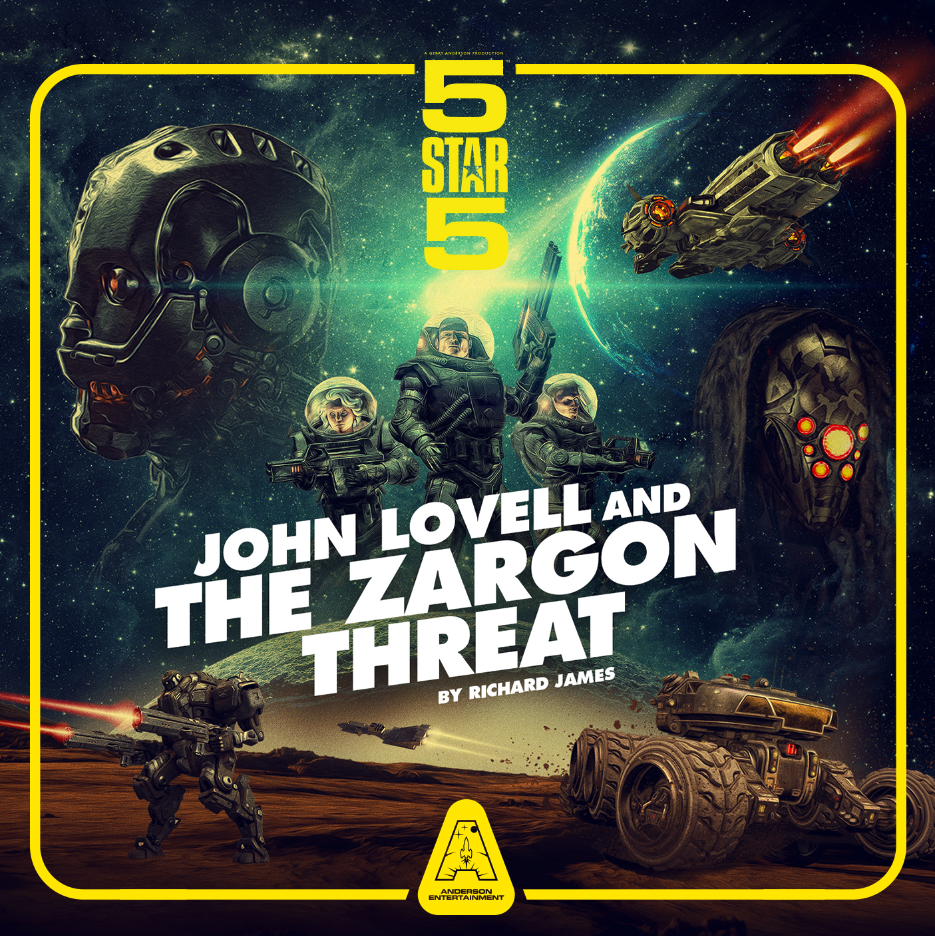 A previously unmade feature film script by Gerry Anderson, the creator of Thunderbirds, is about to make its way into the hands (and ears) of Anderson fans across the globe thanks to a new novelisation and audiobook release.

Five Star Five was to be Gerry Anderson’s answer to Star Wars, but never made it to screen after funding for the project collapsed in 1979. Soon after production concluded on Space:1999‘s second season, Gerry Anderson and Tony Barwick collaborated on the screenplay for the sci-fi fantasy feature film which they pitched as The Magnificent Seven in space (with more than a dash of Star Wars thrown in!). The film even entered pre-production, but once funding fell through the feature was canned and the script was forgotten…until now!

Writer and actor Richard James has adapted the original Five Star Five script into a novelisation. 5 Star 5 –  ‘John Lovell and the Zargon Threat’ follows the story of the original script, and brings to life the characters and settings that were devised by Anderson and Barwick back in the 1970s. Readers and listeners will meet a cast of Anderson heroes and their machines that never made it to screen, and experience a story created in the long gap between 1975’s Space:1999 and 1983’s Terrahawks.

Richard James (whom many Anderson fans will also recognise as the co-host of the Gerry Anderson Podcast and the man behind the mask of Space Precinct‘s Officer Orrin) explains; “I had previously read an excerpt via the Gerry Anderson website and was immediately struck by the pace and excitement of the opening scenes. It was something I was determined to retain in the novelisation. I regarded Five Star Five as something of an historical record, and I felt duty-bound to preserve it as best I could. As I read through the script, I was surprised to see it full of humour as well as the expected thrills; the result, no doubt, of the involvement of regular Anderson collaborator, Tony Barwick.”

“The action sequences seemed to lift off the page and it’s easy to imagine effects supremo Derek Meddings turning his hand to the explosive finale. Who knows how Five Star Five would have been remembered had it been released as a film? As a classic or as a mild curiosity from the late 1970s? Well, with this novelisation, you finally get to make up your own mind.”